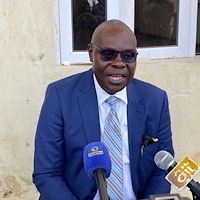 Trademore To Abia Govt: Our Interest Is Solely To Develop the State, Not To Engage In Partisan Politics

A real estate firm, Trademore International Holding Limited has stated clearly that its interest in Abia is solely to develop the State and not to engage in partisan politics.

The company therefore asserted clearly that their client, Prof. Gregory Ibe rented the left wing of their property – Ogwumabiri Event Centre located along Bank Road, Umuahia for his Foundation’s office and not for political party Secretariat, as contained in the Tenancy agreement between him and the company.

The company’s legal representative, Barr. Nwoke John Kalu made this clarification to newsmen in Umuahia, following the directive from the Abia State Government directing them to eject Prof. Ibe for allegedly converting the rented office to party Secretariat; and also the alleged threats made by some politicians to the Chief Executive Officer of the company, Dr. Emmanuel Mbaka warning him to take immediate action to that effect.

Barr. Kalu said upon receiving the letter from the government which was signed by the Secretary to the State Government, Barr. Chris Ezem, the Company investigated the allegation and discovered with dismay that their client has converted the property to All Progressives Grand Alliance State Secretariat without authorization, thereby going contrary to the provision of Clause 4 and 8 of the Tenancy agreement, which also made the company give Prof. Ibe a notice to vacate the event centre, if he refused to revert back to original terms of the Tenancy agreement.

Barr. Kalu maintained that Trademore International Holding Limited has no involvement in politics, adding, “We are mainly focused on helping the country address its housing needs. Our decision to
invest in Abia State is only in a bid to not only contribute to the state’s economy and provide decent affordable housing for the people, but to also provide opportunities for employment.”

He pointed out that Trademore International Holding Limited is a reputable establishment with many years of cognate experience in the real estate
sector, owned by a successful
developer from the state, who has been able to make a
significant contribution to helping Nigeria deliver affordable housing to citizens
through its estates in many of the states.

He made it clear that the company will not forcefully eject their client from the property, since he (Prof. Ibe) has approached the Court, praying that the Company be restrained from evicting them from the left wing of Trademore Ogwumabiri event centre, which he rented on or about the 1st day of July, 2022 pending the Institution and the hearing of the substantive suit.

The legal representative of the Company who went down memory lane to recall the challenges faced by the Company even after genuinely acquiring the land with Certificate of Occupancy, therefore insisted that the Company will follow due process while carrying out its action no matter the pressure.